Last night I saw the most wonderful band, Poor Old Shine, www.pooroldshine.com who bravely made it through 10 inches of snow to play for a party in Coventry, Connecticut. They are an incredibly talented and creative group. Not every band member could get there last night because of the weather, but those who did, treated all of us to their beautiful compositions and thoughtful arrangements. Thank you Poor Old Shine! 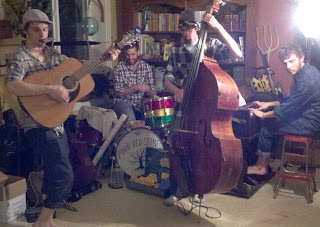 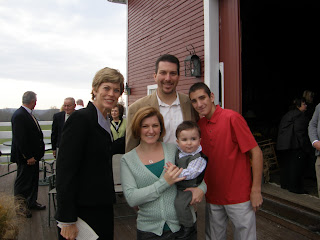 On November 11th of this year, at the beautiful Golden Lamb Buttery in Brooklyn, Connecticut, (http://www.thegoldenlamb.com/)  10 month old Wyatt Bombara celebrated his official Baby Blessing surrounded by family and friends. It was an absolutely gorgeous day and we were lucky enough to be able to do Wyatt’s blessing out on the deck overlooking the pastures. We could not have asked for better weather.
This was a particularly meaningful ceremony for me because on November 14th, 2010 I officiated Wyatt’s parent’s wedding ceremony at the Hartford Society Room. I got to tell the wonderful story of how they met and fell in love and their proposal story which involved a lot of texting! Kate and Chris Bombara are the most wonderful, genuine, and warm couple and when they contacted me to do Wyatt’s baby blessing I was thrilled! This was the first baby blessing I have done for a couple whom I married. It was so fun to see their family members and friends after almost 2 years. Chris’s son Christian, now 13 years old, was Chris’s best man in 2010 and since then he has grown SO much! I am a big fan of Christian’s. He is a wonderful big brother to Wyatt and is quite a good athlete and student. I’m sure in a few years he’ll be as tall (if not taller) than Chris. Plus he is a very good public speaker and helped in the ceremony by reading  a lovely piece about children by Dorothy Nolte.Thank you Christian!
Wyatt, our guest of honor, is a smart and seriously handsome boy. I could definitely see both of his parents in him. He is very aware of everything going on around him and was wide awake and interested at what was being said and done at his baby blessing. Chris held him for most of the ceremony and just at the end when I was about to present Wyatt to his community and give the final blessing, Chris held on to Wyatt’s hands as Wyatt practiced standing, which gave me a perfect opportunity to kneel down right in front of him and offer Wyatt’s blessing face to face! He seemed a little surprised at that and I saw a big smile cross his face, and then even more smiles when everyone cheered and clapped.
Chris and Kate Bombara honored me the first time by entrusting their wedding ceremony to me. To be asked two years later to offer the blessing for Wyatt was another huge  honor and one I will always cherish.
Happy belated second year anniversary Kate and Chris! You and Christian and Wyatt will always be part of my heart.
Posted by Mary Coburn at 12:56 PM No comments:
Newer Posts Older Posts Home
Subscribe to: Posts (Atom)