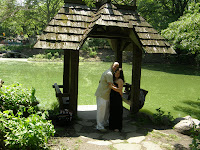 Leah Hacker surprised her husband Chris on their ninth anniversary by arranging an anniversary celebration and renewal of vows ceremony in Central Park. Leah had contacted me a year before and over the months we worked out all the details, which was a challenge because she lives in Florida and I live in Connecticut! But everything worked out perfectly! Near Cherry Hill Fountain in Central Park, a little stone path leads down to a small fishing hut right on the water’s edge, called Wagner’s Cove. The three of us gathered and celebrated their anniversary with a ceremony that looked back over their years together, beginning when we they first met in high school and looking forward to their continuing life together with their two little girls. It was such a joyful celebration, so full of hope and what happens in the lives of two people who really love each other and commit themselves to growing and nuturing a marriage.
Posted by Mary Coburn at 6:51 PM