Happy 1st and 19th Anniversary to my friends Mark & Michael 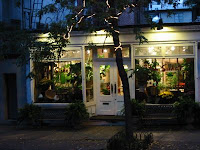 January 18th, 2012, Mark Rhodes and Michael Decker exchanged their vows of marriage. Today marks the first anniversary of their marriage as well as the 19th anniversary of being together.

Mark and Michael have been friends of mine since 1999 when I moved to the beautiful neighborhood of Brooklyn Heights, New York. On historic Middagh St. is the charming store front of Salon Van Sickel (http://www.salonvansickel.com/) the hair salon of choice for everyone who is anyone in Brooklyn Heights! This is where I met owners Mark & Michael and it didn’t take long for us to become friends. In fact, it happened the first time I walked through the door. So when they asked me to officiate their wedding ceremony I was thrilled! Michael & Mark have been part of my life for years and even though I no longer live in Brooklyn Heights, they are never far from my thoughts or heart.

January 18th of last year was a lovely crisp and clear winter’s evening in New York City. We gathered in the upper westside apartment of Michael’s mother and step-father and with family and friends and Max & Luke (their two enthusiastic shelties) all around, we celebrated Mark & Michael’s wedding ceremony. Then we went off to enjoy dinner together! A perfect evening in every way.

It really doesn’t get any better than having the honor of officiating the wedding of dear friends.
Thank you Michael & Mark and a very happy anniversary to you!